A PROJECT BY ESMAIL KHOSH’HAL

Back in August, I received a series of intriguing photos taken in Iran by Esmail Khosh’hal along with this note from the photographer’s friend

“I remember when Esmail started photography. Since then he was always searching for unique subjects and because I knew him well, I expected him to do a documentary. Given his social concerns, he spent a lot of his time with people of lower social levels where people face a hard life full of problems. In 2013, he sold his camera and equipment and went on a trip. This project is the start of Esmail’s documentary photography. The “Midnight Rambles” project is the result of his long and sometimes dangerous walks in Rasht. Thanks to his ability to talk in Gilaki dialect it’s so easy for him to get in touch with people. This is the first collection of mobile photography about nights in Iran and each photo tells a story.”

The photos were dark and brooding. All taken at night, with a phone camera and little light to work with. Shadows of palm trees and security cameras setthe mood while dark silhouettes seemed to stare warily back at the photographer. The longer I looked the more I felt a story building, but at best it was a foggy picture in my mind of people and places unknown to me. I knew I wanted to talk to Esmail more about his “midnight rambles.”

I sent Esmail an email with a few questions – Why did he have to sell his photography equipment to start a photography project? Just how dangerous was his endeavor? How would taking photos at night – risky ones at that – contribute to social change? Esmail wrote me back to explain further.

To answer my first question, Esmail said he had a few reasons for selling his DSLR camera. First, the size of his DSLR camera provoked certain reactions in his subjects he wasn’t trying to capture – fear that he was working for the government or suspicion that he was some kind of news reporter. Plus, he simply felt that DSLR cameras had become “epidemic” and he wanted to create something different. So he sold his camera and started recording his hometown at night more discreetly – with his cell phone camera He then confided, “Maybe the word “dangerous” wasn’t the right word for explaining the situation. But when it comes to taking videos or pictures without permission – it is pretty risky.” If people saw Esmail and weren’t sure what he was up to, they were likely to call and report his activities to the police. Besides the police, there is the general danger felt in every country of heading out alone, at night, in areas where addicts may gather or homelesspopulations may find a place to rest to take photos. This left him feeling even more vulnerable than in other areas One point in Esmail’s favor was his ability to speak the local dialect, Gilaki. Without it, his chances of being harassed by people in general or the police would be greater. Not to say you’d get in trouble all the time, he told me, but at night, on the street, alone with a camera, speaking Gilaki is definitely a protection. But what was the goal of this project really? I knew Esmail has an interest in social issues, I felt like he wanted to bring about change. But could his nighttime pictures make a difference? Many street photographers feel like the best way to bring about change is to make people aware – to show them the issues they don’t yet know about. Was that Esmail’s idea? I decided to ask him. His response was realistic, honest, sad and yet somehow hopeful:

“If only I could, I would make this world a better place. But it can’t happen now. As a person who doesn’t believe in borders and nationalism, my goal isn’t to say, “Hey world, this is Iran.” Instead, I am just trying to show the world around me when people are asleep. 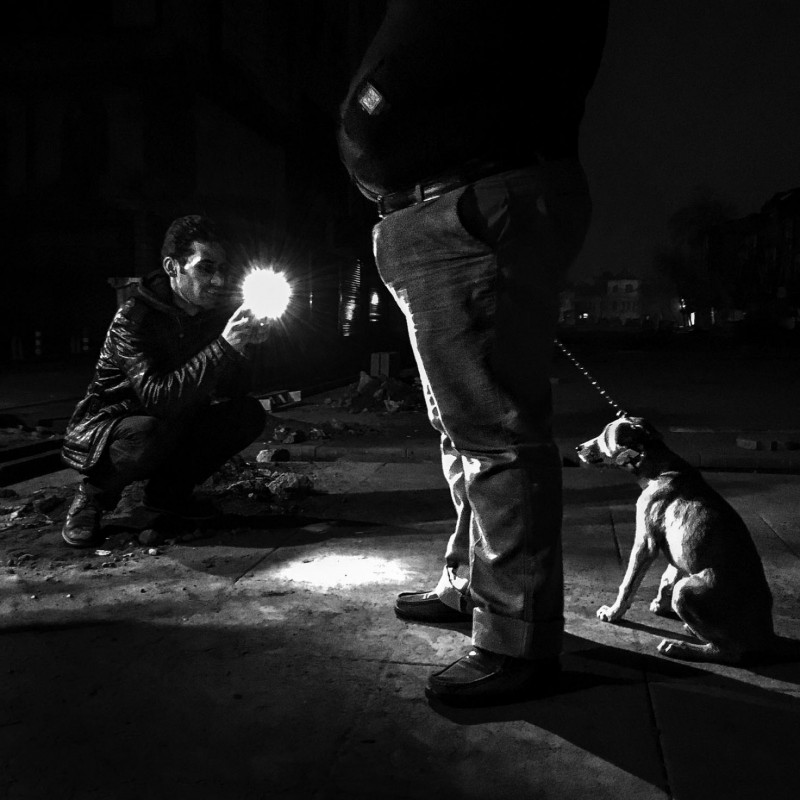